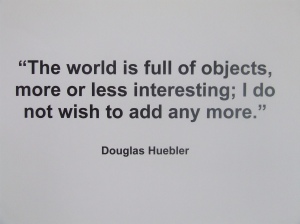 The quote by the American Conceptual artist Douglas Huebler acts as one of the many points of possible departures for me when I decided to undertake a project with Freee Art Collective. As an artist myself dealing with the many issues and beliefs I have concerning contemporary art and its function within the modern world, I realised that I personally did not have any real want to add to it, or at least not in the way the current art scenes expects me to, and especially within the local context.

Nicolas Bourriaud brings a connection to this in his 2002 text ‘Postproduction’ where he believes that ‘Contemporary Art does not position itself as the termination point of the “creative process” but as a site of navigation, a portal, a generator of activities…Artwork functions as the temporary terminal of interconnected elements and reinterprets preceding narratives. Each exhibition encloses within it the script of another…The artwork is is no longer an end point but a simple moment in an infinite chain of contributions’.

I see the work I am doing with Freee as a part of both these statements, I do not intend to create another object, (one reason for making it an online project), but using the slogan by Freee and advancing and disseminating it further within its written form. The medium of it may change, but the text remains the same but can be repeated in ‘an infinite chain of contributions’.

I am an artist and curator, interested mainly in web-based work, video, drawing and animation. I have exhibited locally, nationally and internationally gaining commissions as well as working with communities and in schools on projects. I have worked for a variety of different organisations from an artist run studio and gallery to a large contemporary gallery in a number of different roles. My practice deals with how the reality we live in is constructed by media, where there are many different beliefs, which can be accepted, rejected or modified. I am interested in the disintegration of traditional social discussion and debate, due to media saturation, and how it now manifest’s itself in many new and technological ways.
View all posts by Ben Jones →
This entry was posted in Freee Art Collective, ISIS Arts and tagged Art, Ben Jones, Conceptual, Contemporary Art, Curator, Douglas Huebler, Freee Art Collective, Media, Postproduction, protest, Public Sphere, research, residency, slogan. Bookmark the permalink.